Today, being rather a quiet day for invertebrate reports, there is time for a random musing.

What is the difference between a butterfly and a moth?  An FAQ, to which there is no very simple answer.  The question presupposes that the Order Lepidoptera is divided into two great Suborders,  Butterflies and Moths, but this is not at all the case.  There are five or six Suborders, each divided into numerous Families, and we choose, at least in the English language, to call a few of these Families in one of the Suborders “butterflies”.  I don’t know if many other languages do this.  For example, I believe that papillon, farfalla, mariposa, Schmetterling all refer to butterflies or moths in various European languages, which I’ll leave for viewers to identify – a single word doing for both.

I am lucky to have a copy of the excellent book, by Louis Handfield, called “Les Papillons du Québec”, which means, in English:  “Butterflies and Moths of the Province of Quebec”.  (You spotted where it says “the Province of”?).

Butterflies are brightly coloured; moths are dull grey and brown.  Butterflies fly by day, moths by night. Butterflies have clubbed antennae, moths don’t.  Butterflies hold their wings vertically at rest; moths hold them horizontally.   Moth caterpillars make cocoons; caterpillars of butterflies don’t. The trouble with these “rules”  (there are others) is that there are numerous exceptions to all of them, to the extent than none of them really works at all. Indeed it has even been said that a butterfly is just a sort of moth.

I don’t think I can do better than to quote the words of Moses Harris in the 1760s:

The Horns or Antenna of a Butterfly, hath a Knob, or Ball at the Extremity or End of each, and are for the most part pretty straight. The Antenna of Moths.chiefly diminish gradually, and end in a sharp Point; tho’ indeed some do swell about the Middle, or towards the Point, or End, some are Comb-like and very broad, others appear like fine Thread, and most of them have a winding Motion from the Root to the Extremity; others are notched on the under or inner Side, like the Teeth of a Saw.

A Butterfly always sleeps or rests with its Wings erect over its Back; the Underwings being Broad and without Folds.  The Moth commonly rests with its Wings covering its tail and Underwings; in which Account, Providence has ordered it so, that the Underwings of all Moths, fold themslves up half Way in the Manner of a Fan. A Butterfly always flies in the Day, and mostly in the Morning, but never in the Night.  Moths, some flie in the Day-time, some after Sun sett in the Evening, and others in the Dead of the Night.

Tho’ I must here observe, that tho’ these are Rules very sufficient whereby you may know a Moth from a Butterfly, yet I well know there is not one of the above Rules, but has an Objection; and altho’ Moths and Butterflies are two quite different Species of Insects, and at the very first Sight each of them confess themselves to a good AURELIAN; Yet I wholly believe ‘tis impossible, by any proposed, to make a Rule to know one by, which some one of the other will not be an Objection to.  The same Difficulties arise in attempting to class either the Moths or the Butterflies, and altho’ several has attempted to do it, yet the many Obstacles they meet within their Way, especially among the Moths, many of which will jar,with the Order and Regularity of their Work, that the Matter is rendered extreamly Difficult; these however, they squeezed into some Place or other; for you know they must be put some-where; so at last the Work is rendered Imperfect; but to return to the Matter in Hand.

I shall further observe, that when a Moth in any part of its Investure is seen to close with a Butterfly, viz.either in the Horns, Shape of the Wings, &c, it shall differ in any other Particular, and that so notoriously, that you may always be able to know which of the two it is.  Thus the great Magpie in the Form of its Wings much resembles a Butterfly; but its Horns or Antenna, are like crooked threads; the Head remarkably small…

…Mr Wilks…I think he says, Flies resembling partly Moths and partly Butterflies; here he produces but one single Instance, which to me is no Instance at all of any such strange Being; nor would I have taken the Liberty to have mention’d it in this Work, had I not been fearful young AURELIANS might have been led astray by the Novelty of the Thought, and perhaps in Process of Time, have added a great number of other Moths and Butterflies into a Species of Insects, never before heard of, at least in this Part of the World.  The Fly he speaks of is the Burnet, the Horns or Antenna of which swell…

Time to return to our century!  A few days ago Cheryl Hoyle photographed a beetle, which Charlene Wood has kindly identified to genus for us. Charlene writes:  It’s a curculionid, subfamily Entiminae (broad-nosed weevils), genus Sitona. 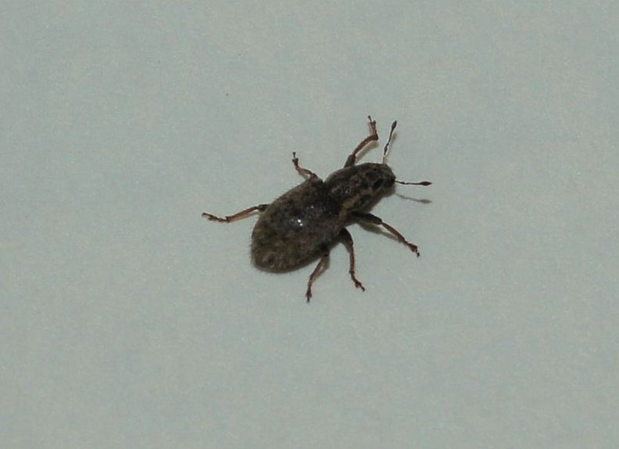